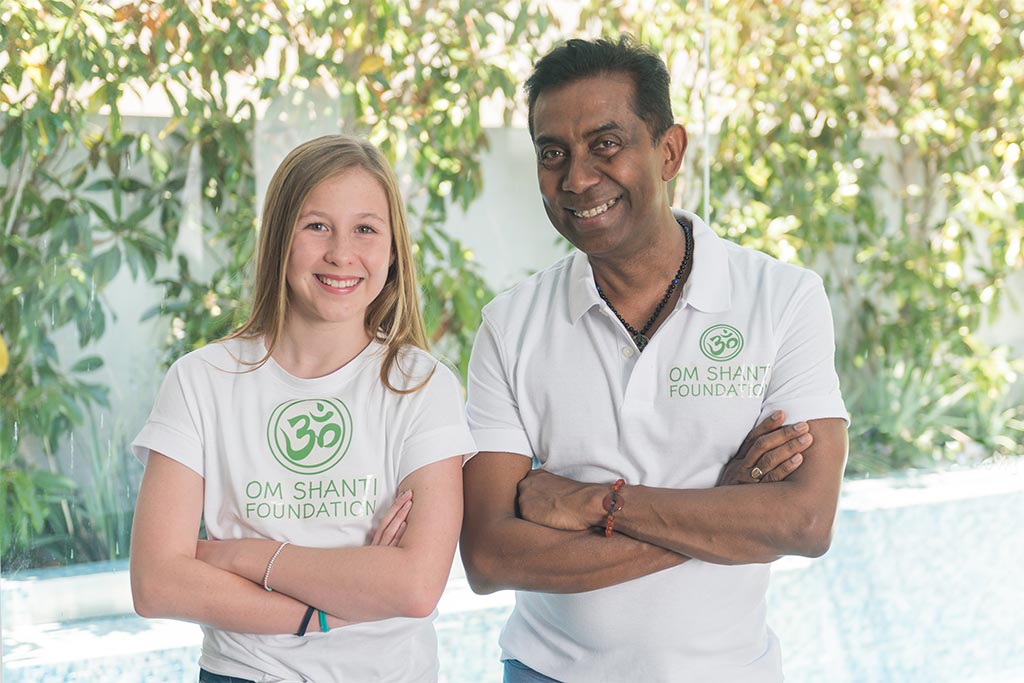 
Om Shanti Foundation is a not-for-profit foundation. We focus on helping people in the poor rural villages of northern Sri Lanka which are still rebuilding after the civil war.

The foundation name combines two Sanskrit words: “om”, the mystic symbol and sacred mantra of Hinduism and Tibetan Buddhism, and Shanti’s own name, which means peace.

Our fundraising activities include our Kids for Kids sister school program, fundraising events and direct donations.

About Sri Lanka and the
Legacy of Civil War

Located in the Indian Ocean south-east of the Indian subcontinent, Sri Lanka is an island nation of lush beauty and rich culture. But it still bears the scars of the brutal civil war that raged between 1983 and 2009.

Ethnic tensions between Sinhalese and Tamil citizens ignited the conflict. Some of the heaviest fighting between government forces and the Tamil Tigers took place in the northern province of Jaffna.

Around 100,000 people lost their lives. Other people were forced off their land or lost their houses, schools and livelihoods. Even basic services such as water wells were destroyed.

The 2004 tsunami compounded the trauma and tragedy in already underdeveloped and war-torn communities.

Today there are few men but almost 90,000 war widows in the rural villages of Sri Lanka’s north. Rebuilding is underway but many people are still struggling to establish life’s bare necessities such as water wells, sanitation and schools.

This is where Om Shanti Foundation is striving to change lives.

Breaking the Cycle of Poverty

Many rural villages depend on groundwater and their water wells were damaged or covered with rubble during the civil war.

Without a local source of fresh, clean water and decent sanitation, people catch diseases. This in turn keeps children away from school and adults away from productive work.

Without the facilities to manage personal hygiene during menstruation, girls often drop out of school prematurely.

Adults – usually women – spend hours trekking to distant water sources, which prevents them from doing other productive work in the community.

Water is essential for growing food and keeping poultry and livestock for food production and micro-businesses.

That’s why water wells and sanitation are priorities for Om Shanti Foundation.

Shanti Sivaraj grew up in Colombo, Sri Lanka. His family weren’t poor but they weren’t rich either, and Shanti was ambitious for financial success.

His ambition was balanced by a strong social conscience. Even as a cash-strapped student, he recalls handing out rupees to destitute street people on the way to class.

He subscribes to the idea of many religions that 10 percent of your income should be “God’s money”, set aside to help the less fortunate.

Shanti studied hospitality in Sri Lanka then travelled the globe to hone his craft before ending up in Melbourne in the 1980s.

With only $200 in his pocket, he and his wife were on the receiving end of charity on arriving in Australia. Two old plates from St Vinnie’s hang in a frame on his office wall as a reminder of the kindness they experienced when first settling in their adopted country.

Despite Shanti’s experience in the glamorous hotels of the Middle East and Europe, his qualifications were unrecognised and he had difficulty finding suitable work. Eventually he secured a traineeship at a fast food chain, and his work ethic was rewarded by promotions and ultimately his own store.

One fast food store steadily grew to six in the northern suburbs of Perth – and with them came the financial security Shanti had worked so hard for.

Now Shanti finds the greatest fulfilment in giving back. In 2014, he embarked on a mission to help people in his homeland rebuild their villages and lives after the ravages of civil war – and Om Shanti Foundation was born.

Shanti’s involvement is hands-on. He personally visits Sri Lanka several times a year to check on the foundation’s projects and see the smiling faces of the kids.

His current goal is to grow Om Shanti Foundation, nurture links between Australia and Sri Lanka, and continue to change lives.

The connection with our projects and the region where we work is strong and personal. Shanti travels to rural villages of Jaffna District in Sri Lanka several times a year with a team of supporters to personally oversee and initiate projects.

We are also setting up partnerships with other key humanitarian personnel in Jaffna District to ensure a constant presence on the ground.

All this helps ensure every dollar we raise delivers maximum value to people in need.